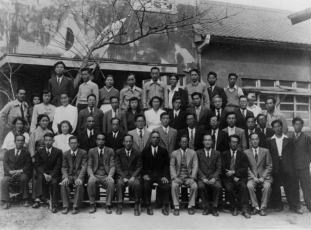 Rapid progress in science and engineering has widened the perspective and diversified the spectrum of applied mechanics. The research activity of the Institute has been naturally expanded beyond its original scope into more interdisciplinary and contemporary areas of applied mechanics. Two examples of its new research activities are the ocean research project and the nuclear fusion research project.

The former aims at the development of new technology for measuring ocean and the scientific study of the ocean by a variety of the data sets gathered with newly developed technology, while the latter pursues establishment of steady operation of superconducting magnets, high-temperature plasma physics, a method of confining and controlling high-density plasma, mechanisms of plasma-wall interactions, and efficient material for fusion reactor.

To carry through these projects, additional facilities are equipped. The Tsuyazaki Marine Observatory Tower Station was constructed 2km off Tsuyazaki in the eastern channel of the Tsushima Strait in 1965. And the High Field Superconducting Tokamak TRIAM-1M started its operation in 1986. The Institute moved to Chikushi campus from Hakozaki campus in 1983.

In order to foster more researches into interdisciplinary and comprehensive areas of applied mechanics including such new areas, as well as to advance basic researches into a deeper understanding of complex phenomena by means of mechanics, we restructured the Institute in April 1997. The RIAM is composed of 3 divisions and 2 research centers (See the Organization chart for details), and became a inter-university Joint Use Research Institute which promotes nation-wide research. Researchers reside and meet at the Institute, utilize its facilities for their research, and interact with Institute members. The Institute will be a national and international center promoting contact and interaction among researchers in the various fields of applied mechanics.